allium blossoms blowing in the wind & sunshine after a rainstorm during a pandemic in this 2020 of ours.

welcome to 2020. we are in the midst of a pandemic since months ago, COVID-19, one of the single biggest lessons for our world across countries and continents in a long time, leading to me stumbling across the concept of carrying capacity at a  biological level.


i've been working on taking more photographs of flowers this spring in balance with this health-centric situation, as i feel strongly and understand that people need to see pretty things, like freshly sky-reaching blooms, out in their world(s) on hard days with so many limitations in order to protect the most basic of safety for each of us and others. seeing what's beautiful around us helps to inspire us with hope, calm us down, and even out some of our worst-reaching emotions.

and i focus on flowers from our earth in balance of loss, too, as today, 284,883 people have died from the virus since the end of 2019 (and 80,000+ in the u.s.) when it was first detected by a doctor who was reprimanded for sharing the truth in advocating awareness, education, and caution to share with all people across our planet and within his own country, which worked diligently to take accountability after realizing how dangerous the situation truly was, and i wish i could say the same for not some but all officials in my own homeland, but many people who are intelligent, self-responsibly properly informed, cognizant, and incredibly careful are doing their best to balance out the energy, willed scope of understanding, and actions of those who are very unfortunately not.

this doctor later died from being infected by the virus from trying to save lives, in meaning well for others. here is a poem i wrote for him months ago. i cry for him every time i see a photograph of his face before he knew he was infected with the virus he identified on behalf of humanity's knowledge—and especially when i see the picture of him struggling to breathe, getting ready to lose his life in a hospital bed in the hospital where he worked tirelessly in trying to do good for others in a new, hard world, sacrificing his right to exist in doing so. please honor him by remembering him and learning from his heart.

i cry for dr. li wenliang,
my eyelids wet, becoming
cold from the sitting saline.
i drift into remembering
how he tried to do a good
thing, how being ethical put
him in danger, led him
to be targeted under law.
then, a second kind of it—
in short sets of weeks, he
had no energy to take
a razor to his cheeks,
stubble growing in while
bedridden, a mask and tubes
staying in place on his face.
and now, his lungs do not
move, like more than 500
others since december,
referred to by their bodies
instead of who they were,
a number growing with our
global, far-reaching sorrow.

Posted by the garden harlot at 3:24 PM No comments:

renegade ornamental peppers & the rain on their undersides.

most of my garden-oriented photographing and blips of writing are now on my instagram page. for someone who is 83 inside despite appearing to be in her 30s in the american sense on the outside, i'm also surprised at myself in making one more online account to manage.

but it turns out that instagram is a very progress-driven place as well as the comforting world of memes to make us hate the worst of our lives a little bit less and actually laugh a little more. and if you avoid the junk-posts and scammers, there is some great and more innovative information out there, too.

in the meantime, here are some renegade ornamental peppers from my backyard, dipped at the bottoms with drops of rain giving into gravity. i loved catching the sight of them. 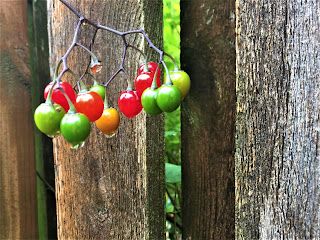 Posted by the garden harlot at 11:04 PM No comments: 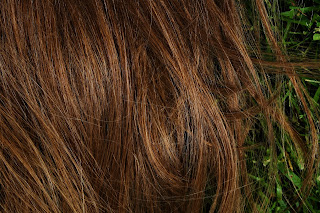 sprawling in the grass in warm weather is one of the most calming practices i've ever stumbled across in my entire life. it is also very free, which is one of my favorite aspects of this routine. simple earthing, grounding is something which makes me feel truly alive. i recommend it to infinity and then some.
Posted by the garden harlot at 6:56 PM No comments:

it is easy to love an antique mower.

but now onto mower-talks. this is my antique mower which i love dearly. i abandoned the idea of using a modern one after i bought this one from a friend who found it an auction. 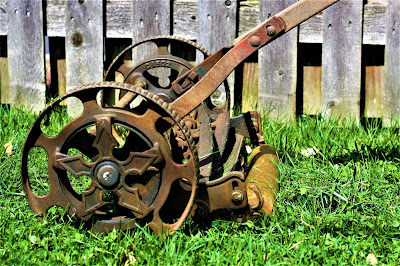 while i've had it for years, and it's one of my favorite parts of warm seasons, i only last week attempted to find out its manufacturer and production year. i did see a twin of it at the leesport historical society a few years ago, and a member estimated that it's from somewhere between 1900 and 1920. googling has so far failed, at least in terms of validating serious background information about my dear antique mower. i'll keep searching. i also appreciate the ab workout which it incidentally offers. oh swoon for antiques to help with yard work routines.
Posted by the garden harlot at 8:47 PM No comments:

a smoothie from only ingredients which i already had on-hand.

after my old blender broke, i went without smoothies for months, but i never drank them that frequently in the first place, to be fair. yet i wanted to get into making them more often because they're often such a healthy choice, and since i am someone who doesn't have much appetite for food in the morning but can drink and sip beverages down when it's still pre-afternoon time, i thought this might be a smart approach to be better to my health.

fortunately, in deciding to ask around if anyone had any spare blenders since appliances are sometimes in doubles in households, with one sitting around waiting for a purpose again, it worked out that the first person i asked, my sister, had a backup blender to offer since she mostly works with her go-to nutribullet and only used her blender once. so it sat in a box after that initial use. and apparently, it was waiting for me to own it, ha. love at first smoothie. 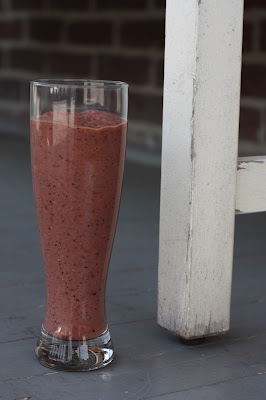 since becoming the new owner of this blender yesterday, by this morning, while i knew i wanted to test out all sorts of new smoothie recipes, i decided just making up my own not-so-tracked recipe would be the best approach. plus, i felt really thirsty-hungry and wanted it ASAP ! here is a list of ingredients which i threw together in random little amounts for the above-glimpsed smoothie.

a few months ago, a too-sweet smoothie quickly taught me the value of lemon juice, which i adore in the first place since i love all things sour. so i am sure that helped in balancing out the flavor adequately in today's quick practice at the blender. it's so nice when you don't have to be so calculated and yet can still make something healthy, delicious, and filling. yum x 4982945832045.
Posted by the garden harlot at 11:25 AM No comments:

in 2013, i began one of my most absolutely fun writing jobs for vanduzer design & marketing. it involves farm blogging for weaver's orchard in morgantown, berks county, and wolff's apple house in media, delaware county.

this week, i wrote about moon gardens for wolff's apple house and interviewed holly cusumano of phoenixville, chester county, about this topic. i've mentioned before that cusumano visited my pull of poems class as a guest writer when we focused on moon poems.

below are some scenes from cusumano's moon garden plant children, including elderberry, dianthus, and valerian root from camera moments in her backyard. then...more haiku. always more haiku lately ! 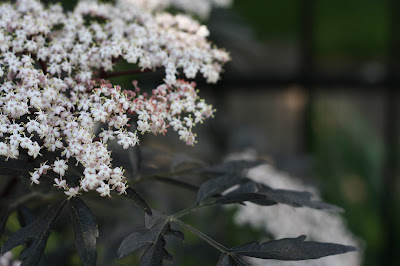 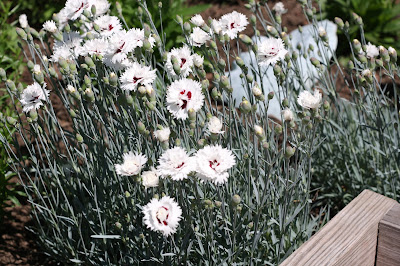 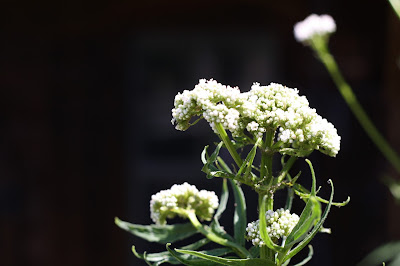 cusumano is the chairman of the herb society of america's philadelphia unit. you can eye-peruse her recent moon garden reflections and design suggestions on the blog for wolff's apple house, here.

yet again, a haiku popped out of my brain-box. it is apparently the week of haiku in my life, given the stuffed grape leaves and heirloom tomato children haiku of recent days.

blooms mingle night talks
under beams of moon-glitter:
salt-pearl garden light
Posted by the garden harlot at 3:02 PM No comments:

this is cross-posted from poetry with jennifer hetrick. very, very long time no blog, yes-hmm !

i glimpsed first signs of heirloom tomato plant children in my garden, a sight of farm and earth gifts possible in a small backyard in a borough. every year, i order tomatoes from erica bowers-lavdanski of b&h organic produce in caernarvon township at the edge of berks and chester counties.

this particular plant is called matt's wild cherry. i plan to save some of the eventual tomatoes for my one brother since this is his name, too. i'm also in people's gardens sometimes, as well, and point this out when i notice myself sprawling in a landscape. creeping jenny. =) i may save brain-space for a creeping jenny haiku in the future. 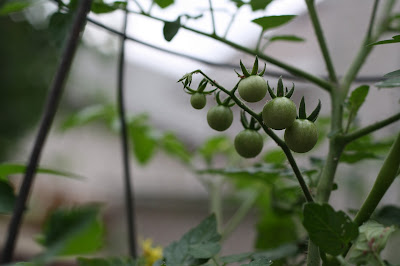 here is a tomato children haiku sparked from this eye-scene.

visit your own garden for some poetry-whisking ideas.

the garden harlot
chasing the sky.